MiamiSprings.com | Miami Springs News and Events
Home History Glenn Curtiss – A Look Back at the Elon Musk and Steve... Before Elon Musk…Before Steve Jobs…Before even the Wright Brothers took flight, the whole world was fascinated by one daredevil of a genius inventor…Glenn Hammond Curtiss.

Today, the modern mini van can exceed 100mph on the Florida Turnpike without a sweat.  (Not that you should ever do that!)  But imagine doing 136 miles per hour, on what’s basically a bicycle with an 8 cylinder engine, on the beach!  That’s the feat that legendary pioneer, Glenn Curtiss achieved back in 1907 and officially made him “The Fastest Man on Earth!”

Below you’ll find a series of videos depicting Glenn Curtiss’ incredible contributions to man, as well, as South Florida. 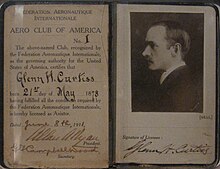 Hurricane to Stay Away