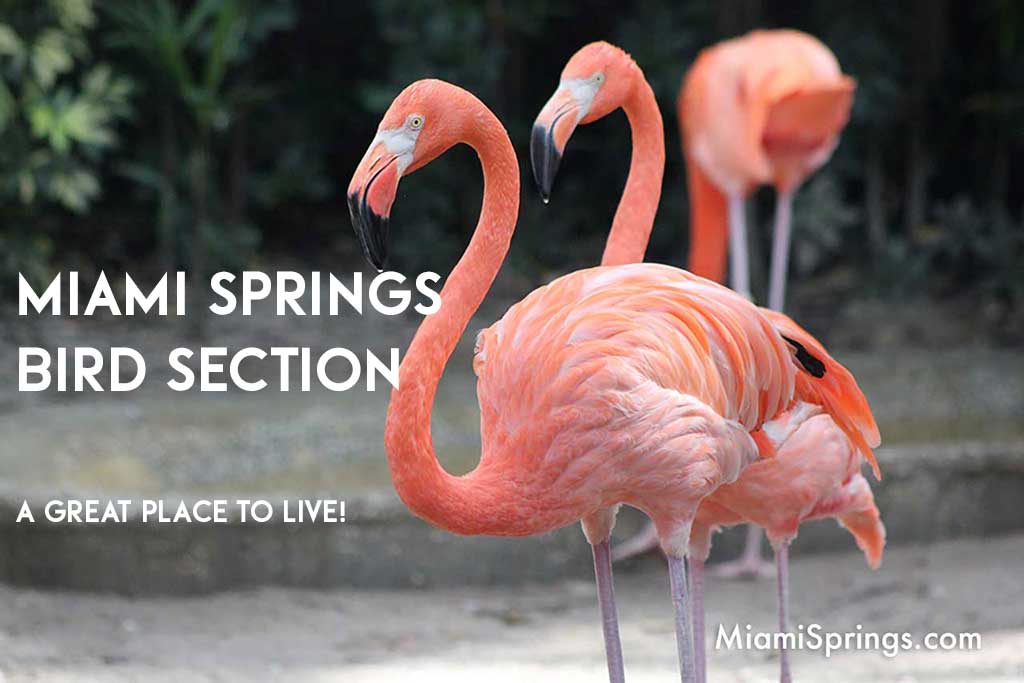 Miami Springs is a wonderful place to live.  We are centrally located in the heart of Miami.  We are just 10 – 15 minutes away from downtown and Miami Beach.  We have easy access to bargain shopping in Hialeah or luxury shopping in Coral Gables.  We have great schools and a quiet community that is the envy of much of greater Miami.

What is the Miami Springs Bird Section?

The Streets of the Miami Springs Bird Section

Below you’ll find the street names found in the Miami Springs Bird Section and the accompanying birds they represent.  We all know what a Flamingo looks like, but what does a Plover, Wren, or Thrush look like?  And which of these birds can you find locally here in Miami Springs?

Among the bird names used in Miami Springs, the Flamingo is probably one of the most iconic.  We have flamingos that are native to the Caribbean.  And you can sometimes see them flying in Hialeah based out of the Hialeah race track.  There have also been reports of nesting flamingos on isolated mangrove islands in Florida Bay.

Flamingos are common at zoos and nature parks in the State of Florida, but if you ever catch a glimpse of something pink in the air, get your cell phone out and try to take a picture.  It’s extremely rare to see one flying in Florida.

Have you ever seen a Flamingo flying or nesting in Florida?  Share your story in the comments section.

The red cardinal is an iconic American bird.  The cardinal has a range as far north as Canada and as far south as the Mexican Yucatan peninsula.  We’ve had the pleasure of seeing these red Cardinals from time to time in Miami Springs.  Feel free to share any photos you may have of a Cardinal in Miami Springs in the comments section.

The North American Tree Swallow doesn’t make it to South Florida, but the Bahamas Swallow does reportedly show up in South Florida and the Florida Keys from time to time.  It’s a rare treat if you see one.  (Share you photos in the comments section or via social media.)

You’re never going to see an Albatross flying in Miami Springs as these birds are home in the Pacific Ocean.  The Albatross is known for its great wingspan (reaching up to 12 feet) and its ability to cover vast distances in the ocean.

The horned lark breed across North America from the Arctic down to Mexico.

The mute swan is an introduced species of swan to North America.  Technically, it’s considered an invasive species.  Remember that Miami Springs is a bird sanctuary and these birds are protected within our community.  The mute swan does have a year round population in South Florida.  Share photos you may have of swans in Miami Springs in the comments section or via social media.

Falcons are a group of birds of prey that include about 40 different species of birds.  Four falcon species can be found in Florida.  They include the following:

There are 45 different species of Plovers.  The American Golden Plover is a migratory bird that spends the winter in southern South America and migrates through Central America to spend the summer in North America.  The birds then return to South America via Florida and the Caribbean.

Wrens are a family of birds that include 88 different species. Wrens can be found throughout the New World (Western Hemisphere) from Alaska and Canada to Argentina.

There are 33 different species of New World Orioles spread out from North America to South America.  Some of the unique species include the Cuban Oriole, Bamaha Oriole, Puerto Rican Oriole, Hispaniolan Oriole.  In Florida, you’ll find the Baltimore Oriole (yes, that’s its real name) wintering.  So keep an eye out as temps begin to cool up north.

The Nightingale is a European bird you won’t find in Florida.  But you will find it wintering in Sub-Saharan Africa.

The Common Raven is a large bird found throughout most of the Northern Hemisphere, but is not commonly found in Florida.  In Florida you’ll find the American Crow which is smaller than the Raven.

There are many variations of the quail in both the old world and new world.  Quail has often been used as a food source with over 40 million produced in the United States in 2007.

Doves are pigeons with the most recognized version being the white dove.  White doves have been used as a symbol of peace for centuries.  The Christian faith has long used the symbol of the white dove to represent peace and the Holy Spirit.

You’ll be hard pressed not to see an Ibis around Miami Springs from time to time.  The Ibis is legendary in Miami as it is the Mascot for the University of Miami.  There are 29 different species of Ibis.  Locally, you’ll find the American White Ibis.  Legend has it that the Ibis is the last bird to fly away before a Hurricane arrive and the first bird to re-appear after a Hurricane.  Thus, why it is used as the mascot for your Miami Hurricanes.

Herons are a group of birds with 64 species some of which include egrets.  (No wonder I’ve always been confused with Herons and Egrets.). Below is a Great Blue Heron in the Florida Everglades.

When people think of Partridges they might think of “a Partidge in a pear tree” from the famous Christmas song “The Twelve Days of Christmas”.  Others may think of the Partridge Family.

Partridges are Old World birds found throughout Europe, Asia, and Africa.  However, partridge species have since been introduced to the Americas.

Bluebirds are not Blue Jays.  We have plenty of Blue Jays in Miami Springs.  We see them all the time.  You can find the Eastern Bluebird in Florida, but they are not found south of Lake Okeechobee.  So if you see a bird like the one below, be quick and take a pic.  They aren’t normally found this far south.

The Eastern Meadowlark can be found in the Eastern United States and in Florida year round.  They can also be found in Cuba and in Venezuela.

Starlings are an Old World bird and will not be found in Miami Springs.  They are common in Europe, Africa, and Asia.

Thrushes are small to medium sized ground living birds that feed on insects.  They have a worldwide distribution with 174 different species.

Cranes are found across most continents except Antarctica and South America.  In North America you’ll find two species of cranes:  the Whopping Crane and the Sandhill Crane (pictured below).  We have seen Sandhill Cranes in Key Biscayne, but have yet to see one in Miami Springs.  Have you seen the Sandhill Crane?  And if so, where?

Share your thoughts about the Miami Springs bird section and the birds represented by the street names in this Miami Springs neighborhood.  Use the comments section below or social media to share some of the images you may have captured of some of the birds depicted above.