Science says the oceans are warming 40% faster than was thought 5 years ago yet we are 50% less likely to believe them. Is global warming the reason for the record levels of temperature reached by the world’s oceans or do new studies show something else? Scientists issued guidelines about too many people peeing in the ocean which, of course, will warm the water.

Manatees are the only ones that have not complained, due to their proclivity for warmer water. Whale squeaks may have finally been deciphered as “We don’t swim in your toilet, please don’t pee in our ocean.”

Greenland’s ice cap represents 10 percent of the world’s total fresh-water reserves. If all the ice were to melt, the World’s oceans would rise almost 23 feet. That’s almost as tall as an NBA center. They would have to hold us on their shoulders and there are not that many of them.

Spoiler alert! The polar ice caps are melting. No, really! Have you seen a polar ice cap? We’ve seen pictures, but anything can be photo-shopped.  We don’t travel to that area unless we’re in the Ididarod sled dog race from Anchorage to Nome. Our dog won’t even run for a ball much less travel almost a thousand miles through ice and snow with ice-cold kibble as a reward. Cats would never go for an event like that and they would probably not even want to all go in the same direction.

There are some who believe ice melting in their drink is just as dangerous and it’s got the same effect; you water down the drink. In this case we’re watering down the Earth. But just like the price of isopropyl alcohol, the cost to prevent being washed away will go through the roof. A sea wall for Florida is being considered and if Miami-Dade were to pay for it, they need to spend $3.2 billion for 267 miles of the barriers. Couldn’t we ask Bob’s Barricades to help? 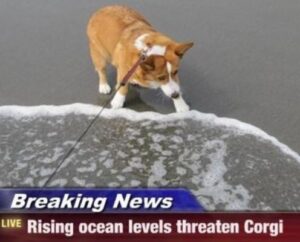 Miami Beach is coping with sea level rise in a unique way.

The City has declared city streets commercial fishing zones during the hours of king tide and will issue fishing licenses to all residents. There are some rules. You can’t catch and release. Releasing the fish back into the water tells the fish you’re not serious about fishing so they’ll just stay, spawn and develop 3 eyes or grow feet to escape the rancid water.

Crabbing is free, however, and can take place from Alton Road east to Washington Avenue, though not during any major events. “Crabs sidling in the streets are a public menace and we encourage residents to catch them whenever they can.” stated a city memo to employees. They’re good with a butter sauce in crab salad tapas.

“You just hold a net in the gutter and the fish swimming by will be yours” said Alfredo ‘Justo’ Baclava. “There was a giant squid trying to board the route 123 South Beach local. It didn’t have the correct change, so I caught him sliding off the bus. He’ll be dinner.”

Residents cannot deny the sea-level is slowly, inexorably rising, because the water marks on cars in the lower garages have moved up past the bottom of the doors.

In a surprise move, the Governor, a climate change denier, has issued a change of policy. Florida Department of Environmental Protection employees, contractors and volunteers have been told they can now say the words climate change and global warming now but only on Sundays and only in French.

Universal Studios might want to partner with Miami Beach and create a new theme park called Awash with Adventure! (You must be this tall and be able to swim)