As we reported last month, there was an alleged armed robbery that occurred on November 15th near Deer Run and Curtiss Parkway at approximately 2am.  The City of Miami Springs reported that a subject had “approached the victims, brandished a handgun, demanding property.”

The incident was initially reported on the Miami Springs Community Group on Facebook.

“My brother and his girlfriend got robbed at gunpoint yesterday on Curtis and deer run. Right at the corner in front of a house. Guy came out from behind a car. Please be careful.”

According to further details posted, the incident occurred around 1am on Sunday morning, November 15, 2020.

The alleged suspect was described as “Younger male, about 5’6, African American, had a blue half mask and a 380 on him. Just FYI. Stole my brother chain and took their phones and dropped them together In the golf course. So a young kid but the gun was definitely loaded. My brothers head is swollen.”

We asked if a Police Report had been filed.  Jessica replied by stating “They immediately drove to the cops. My brothers head was very swollen. They found the phones bc I have location services on for him and I saw where it was.” 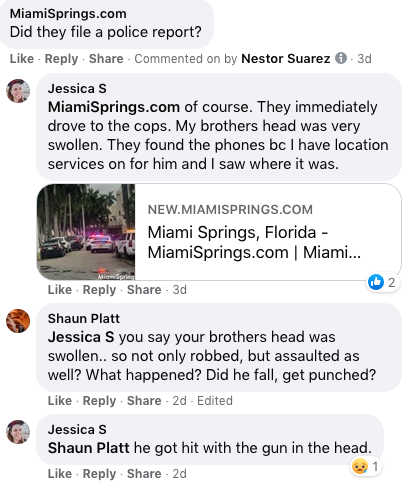 As always, if you see crime or have information about a crime, please contact the Miami Springs Police Department at 305.888.9711.