Well, that was until the city approved a homeowner’s fence that cut off alleyway access of the City’s trucks. Now, these residents who live along the U shaped block on streets including Azure Way, Glenn Way, Pinecrest Drive, and Morningside have lost city services via their alley.  These residents still have an alley behind their homes.  But instead of putting garbage in the trash bin in their alley as they’ve done for decades, they now have to put it in front of their homes.  Instead of putting their bulk trash in the alley, they now have to put it in their front swale.  As one resident said, “it’s going to mess up all our yards in the front.” 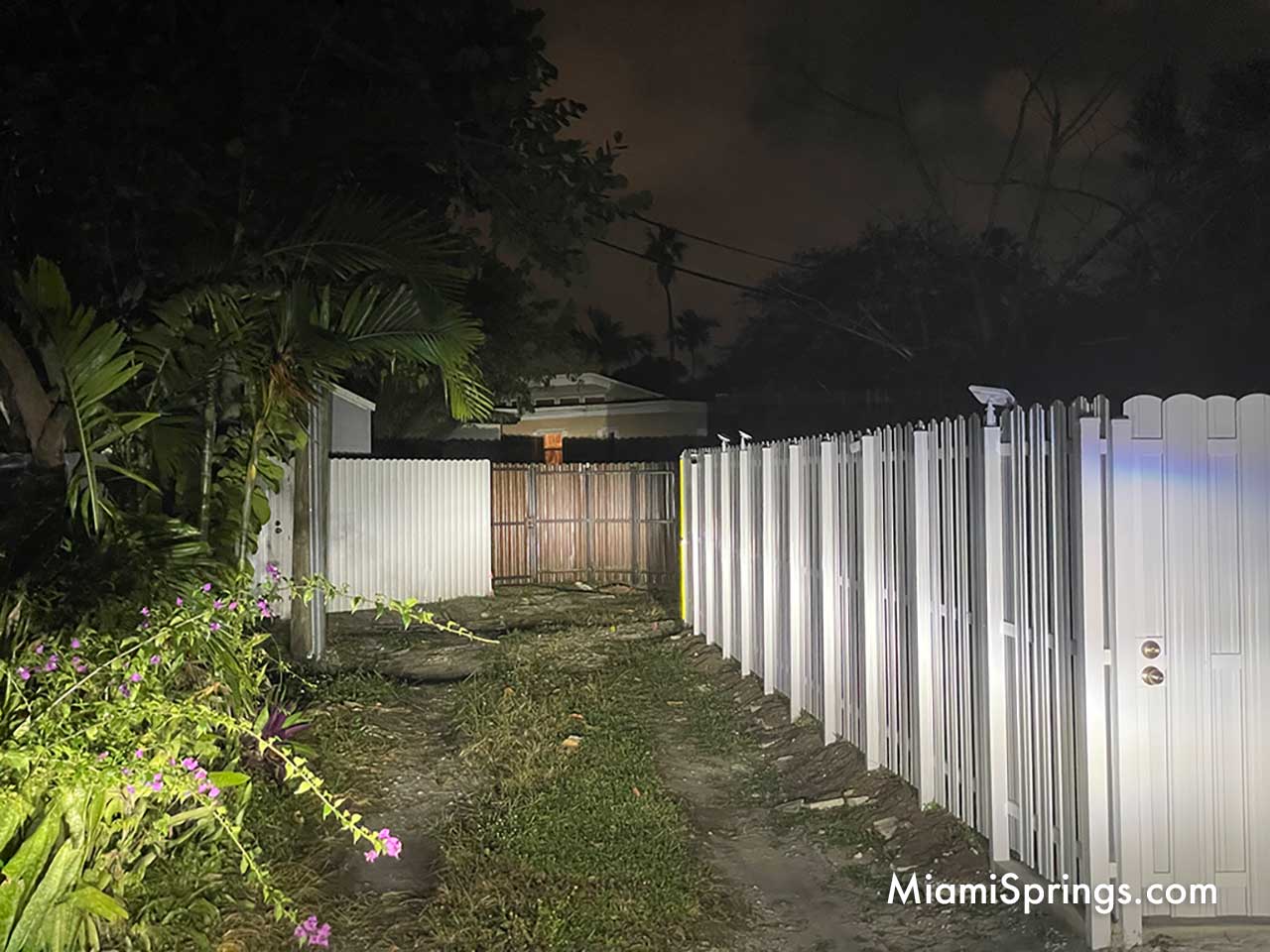 Another resident, Thomas Lopez of 101 Pinecrest spoke up at Open Forum.  He stated he’s lived there for thirty-five years.  That’s thirty-five years of continuous use of the alley.  He also stated that his home was built back in 1949. In other words, the alley way has been open for over 70 years.  “All of a sudden, one of our neighbors was issued a permit to put a fence…he hasn’t had for 70 years.   And he blocked 24 homes from having their alley being used….I don’t think it’s fair or right or legal that he put a fence up [blocking the alleyway] after having it open for 70 years…”

Lopez then brought up the legal term of a Prescriptive Easement.  He stated, “the requirements of a Prescriptive Easement is openly, notoriously, continuously for five years or more…and for 70 years that particular property did not have a fence or anything to interrupt the service from the city to go through and pick up our trash…Now our lives are turned over because some guy put a fence because he wanted to block two feet in the corner of the alley…It’s not the entire length of the yard…”

I drove through the alley in question with my F-150 pickup.  My pickup can barely make the turn.  My truck is 6.5′ wide.  The garbage trucks can be up to 8.5′ wide and significantly longer.  There’s no way they can make the turn in between the utility pole and the edge of the homeowner’s fence. 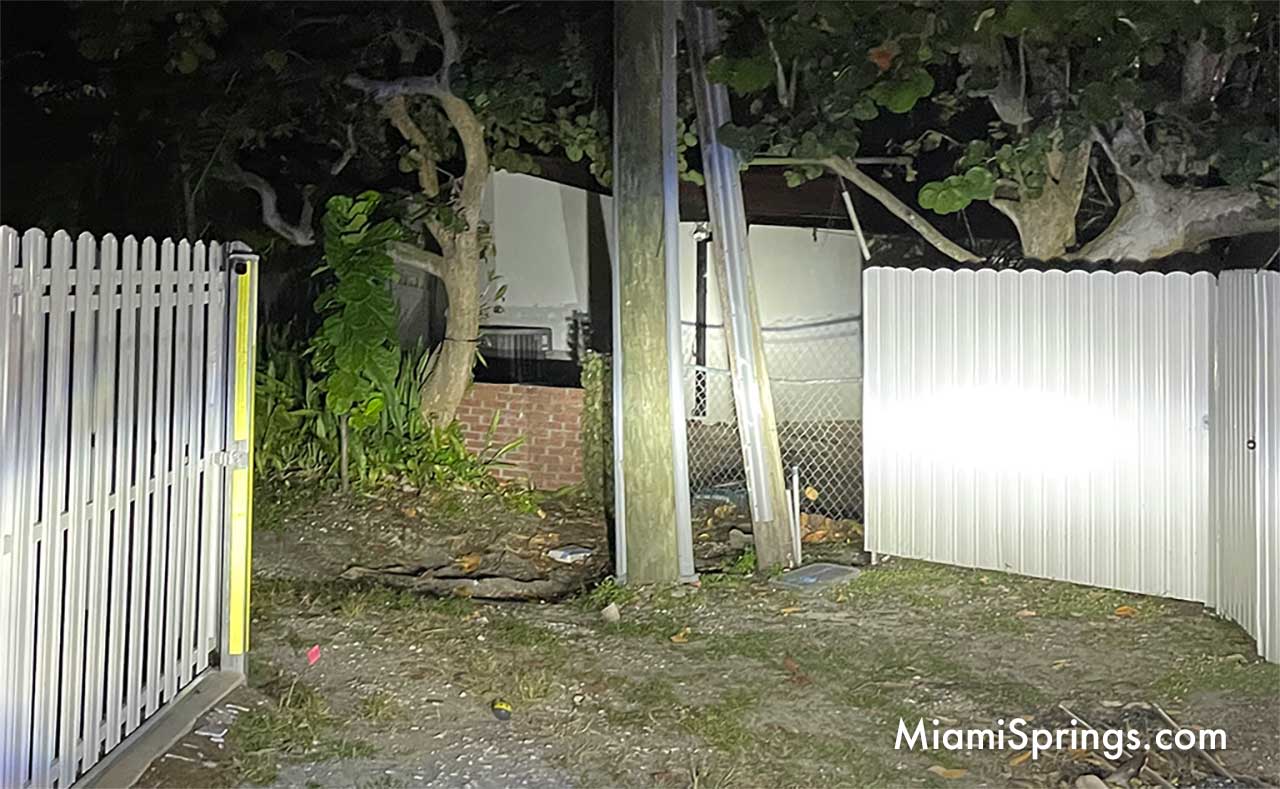 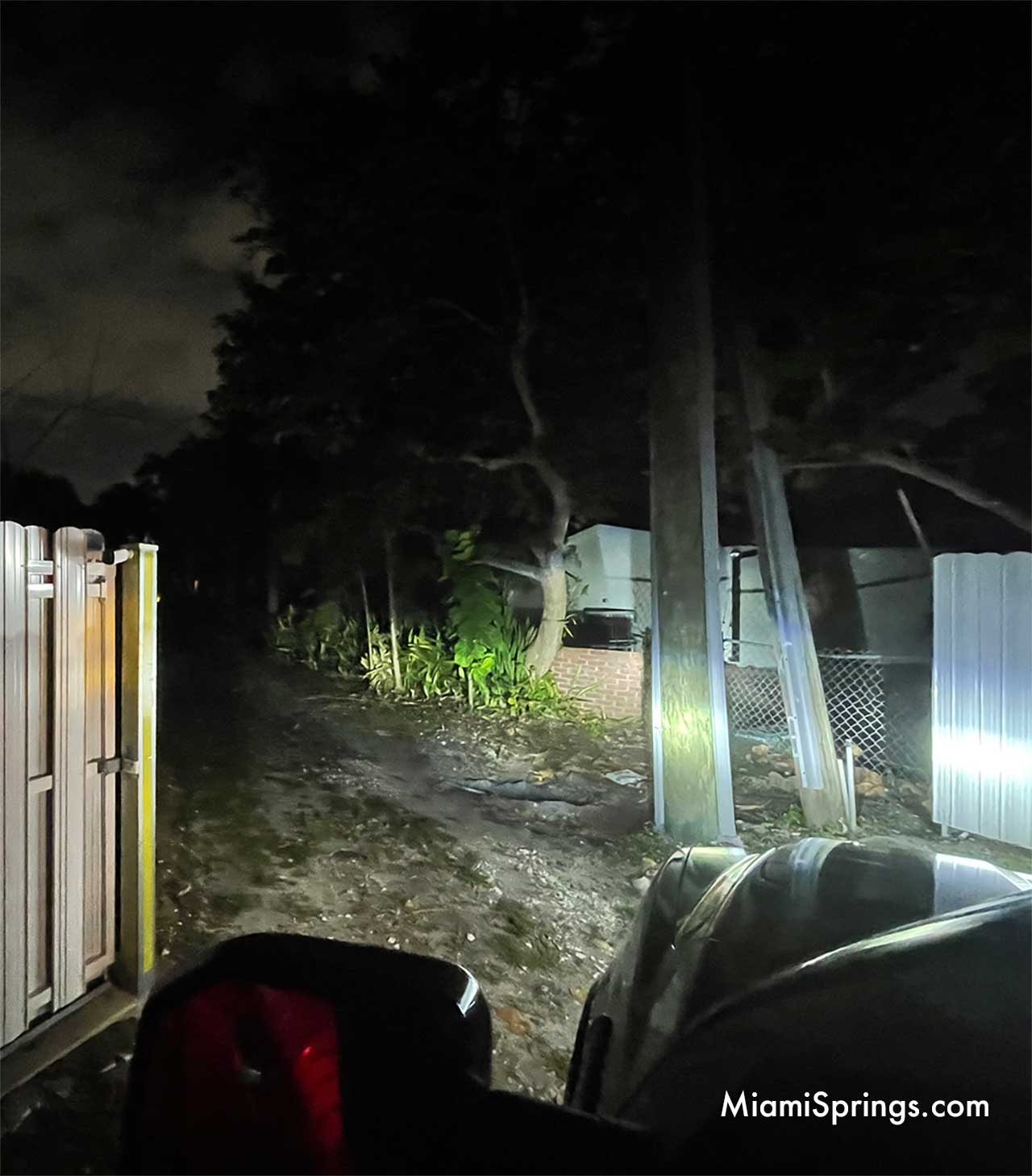 The alley is colloquially called the Azure Alleyway because you enter and exit the alley on Azure way.  The alleyway can be described as U or V shaped alley with several turns. 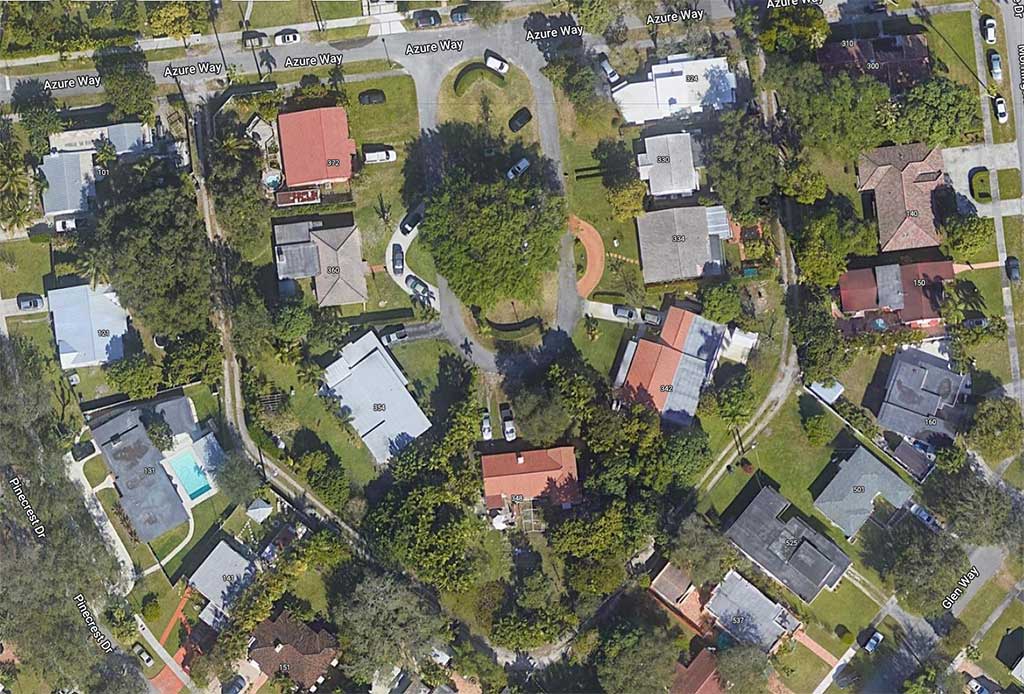 Not the Homeowner’s Fault

We don’t fault the homeowner who added to the edge of their property line.  However, the City should have realized the impact the fence would have on the alley services before approving it.  I’m sure the homeowner had to have a survey of the property and submit all the plans prior to having the fence approved.

Bad Situation for Everybody

This situation is bad for the 24 homes that lost city services to their alley.  And it’s also bad for the resident who spent good money getting a survey and installing a high quality fence around his home along with a security system and cameras.  It’s not the resident’s fault the City of Miami Springs approved his application. 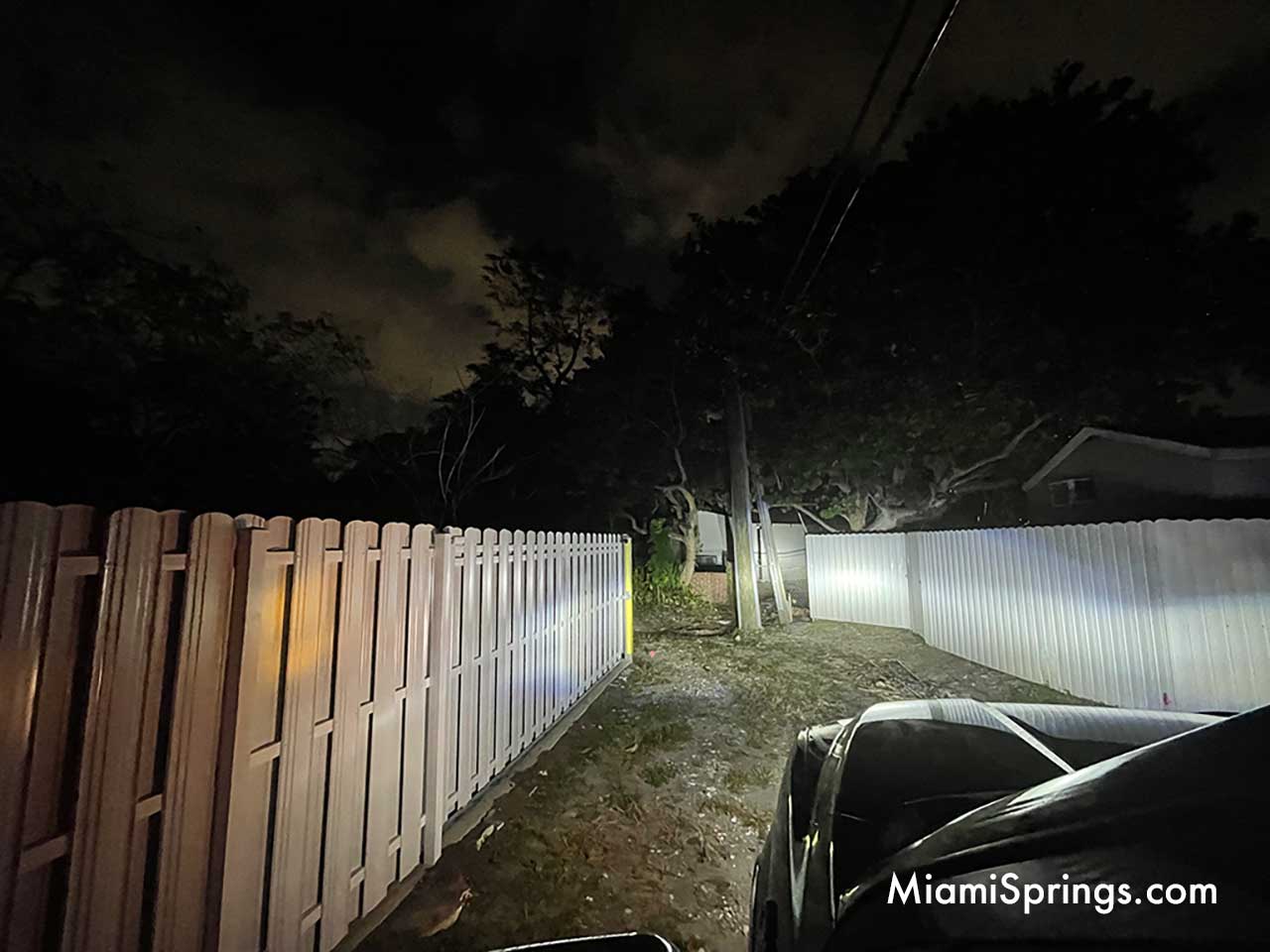 The City of Miami Springs should have realized that the corner of the yard needed a cutout to continue to allow passage for the trucks that have used the alleyway as Lopez said “for over 70 years.”  The City should have only approved the plan if the plan showed there was sufficient space for the garbage trucks to continue to use the alley.

So who got screwed here?  The neighbors who now have to put their trash in the front and the resident who might have to change his fence AFTER the city approved it.  And don’t forget, now you and I may have to pay to get this situation remedied as tax payers of the City of Miami Springs.

We are not attorneys nor should you take what we’re writing here as professional legal advice, but a little research shows that you need 4 elements for a Prescriptive Easement:

Well, the right solution was for the city to require a cutout to allow the truck passage.  But that clearly didn’t happen.  So what solutions do we have to fix the issue? 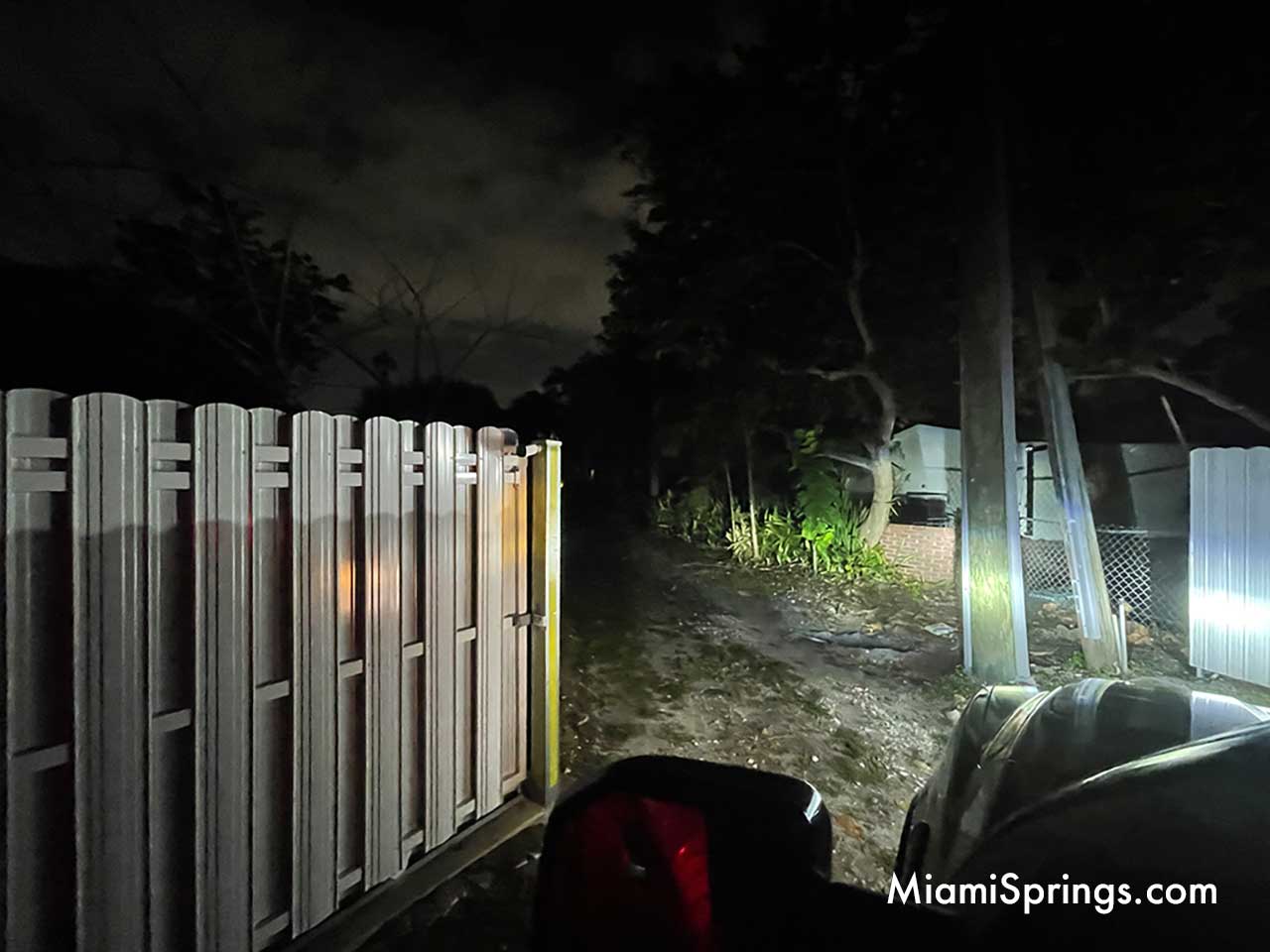 Furthermore, the City of Miami Springs should provide the 24 homes a credit on their garbage bill for each month their alleyway garbage pickup is unavailable.  This will put pressure on the City to speed up the fix.

Now, it sucks that we would have to pay for the City’s mistakes, but if the City had screwed this up on your block, you’d want a remedy, too? 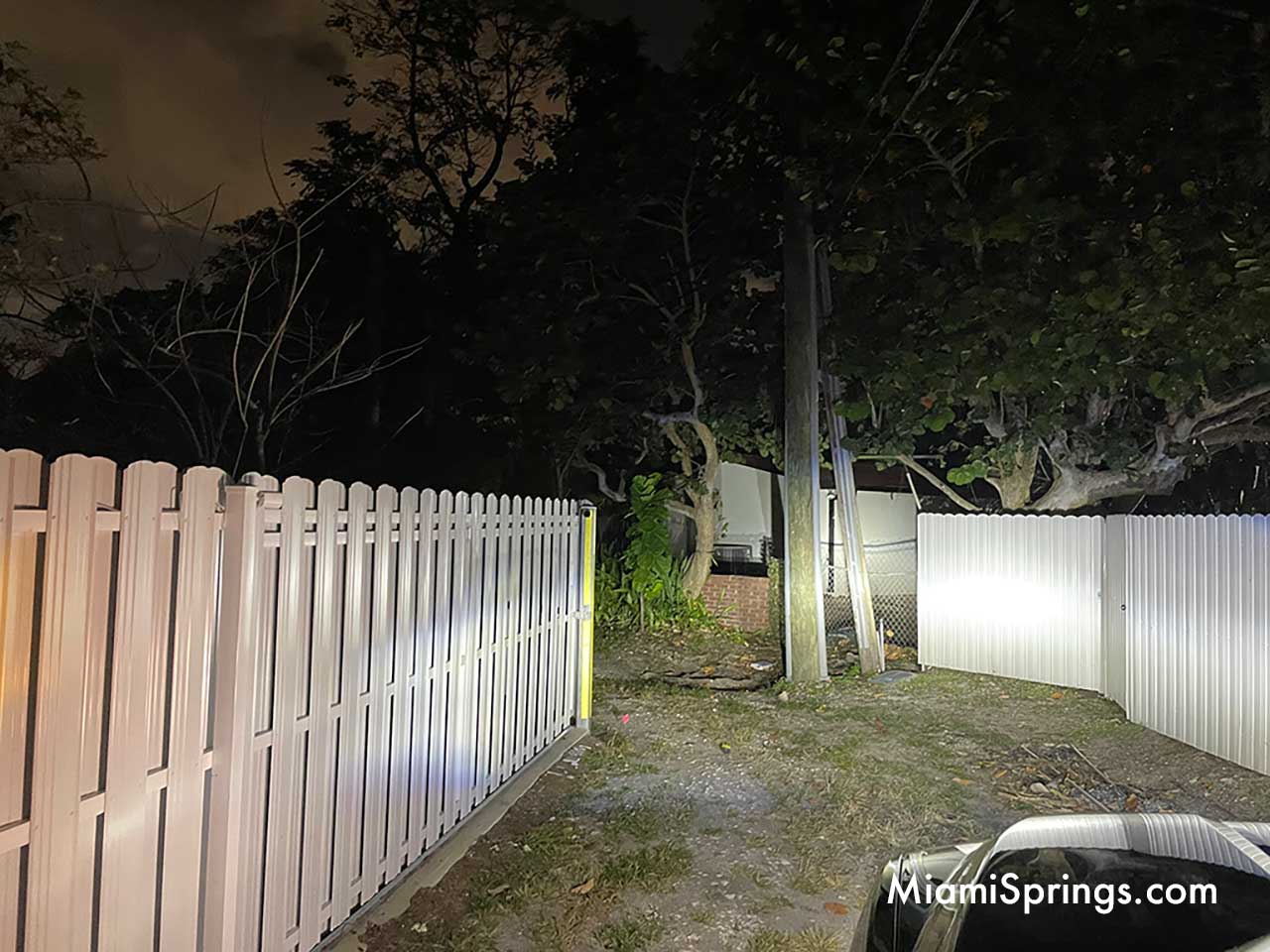 The other solution might be to move the utility pole.  This may give the trucks enough space to turn without clipping the corner of the homeowner’s fence.

Again, the City of Miami Springs should pay for the solution seeing as they approved the plan that created the problem in the first place.

And again, the City should provide the 24 homes a credit on their garbage bill for each month their alleyway garbage pickup is unavailable.  This will put pressure on the City to speed up the fix.

Did the City screw up on this?  What’s the right solution?  Do you have a better solution? How would you feel if the city took away the usage of your alleyway?  Let us know in the comments section below or via social media.

How to Create a Dating App Like Tinder and Succeed

July 4th Parade is Back – Register Now to Participate