Censorship has been all over the news these days.  The New York Post, which was founded by none other than Alexander Hamilton, has been suspended on Twitter for reporting on an a hard drive that allegedly connects Joe Biden to foreign corruption.

Of course, in Miami Springs we don’t have to worry about censorship because big tech would never censor citizens in little old Miami Springs…Or would they?

Facebook, which is now a judge, jury, and executioner, removed a photo posted on the Miami Springs Community Group today.  The photo was taken during the peaceful rallies this past Sunday.  Biden supporters were along Crescent Drive and Curtiss Parkway with the Trump supporters on Curtiss Parkway near the Circle.  Police were present, but by all accounts it was a peaceful display of opposing points of views expressing their freedom of speech.

We posted multiple photos of the event that were shared on the Miami Springs Community Group on Facebook.  We shared Biden rally photos:

And we shared Trump rally photos:

No big deal.  Just freedom of speech and freedom of assembly happening right here in our beautiful neighborhood.

Of course, the comments always get into the typical back and forth you expect to see on social media 2 weeks before an election.  Again, normal and no big deal.

Members of the Miami Springs Community from both sides posted photos to the Group about the event.  Biden rally photos and Trump rally photos were both posted.  Again, all very normal.

However, one photo posted by Vincent Medel was apparently unacceptable to the thought police at Facebook.  According to Facebook, the following photo goes against Facebook’s “Standards on dangerous individuals and organizations.” 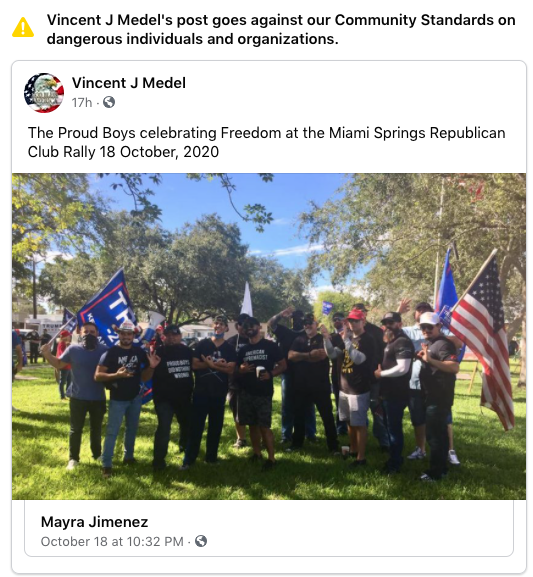 No offense, but who the hell is Facebook to determine who is and who is not a dangerous individual and organization?  These local neighbors are now dangerous?  Seriously?  Facebook can now determine from the caption of a photo that these people are dangerous to society?  Huh?  I thought only a jury of my peers could do that?

Now for the record, I know that the “Proud Boys” group has been controversial and deserves to be scrutinized like any other controversial group.  But to censor this photo?  For what?  There’s no violence.  There’s no CNN reporter flashing his privates.  There’s nothing indecent.

Again, I’m not here to defend whatever the “Proud Boys” stands for.  (Honestly, aside from reading that it’s a right wing group, is supposedly racist, but is led by an Afro Cuban, I have no clue what they stand for.)

My point is, it doesn’t matter what they stand for.  This photo is in no way dangerous or indecent.  These are neighbors.  Frankly, I prefer the commentary you, the readers had on this photo.  Some were critical of the “Proud Boys.”  Others defended it.  That’s the kind of public scrutiny and back and forth public discourse that America deserves.

But to silence and remove a photo (and all your comments) because the Lords of Facebook decide it’s dangerous.  Really?  This photo is dangerous?

The photo is not dangerous.  However, the power of BIG TECH to filter what you say.  Now that is dangerous.

My neighbors, this isn’t about left or right.  It’s about Freedom of Speech.  Do we still have that Freedom in a World that is dominated by BIG TECH?

The Department of Justice just opened an anti-trust lawsuit against Google.  This summer, both Republicans and Democrats in Congress were critical of Twitter, Facebook, and Google.  The one thing both parties seem to agree on these days is that BIG TECH is becoming too powerful.

What do you think?  Should Facebook have removed a photo of Miami Springs residents at a rally on Curtiss Parkway?  Or do you think it’s better to leave the photo and let people share their commentary?

We trust your opinion over Big Tech any day.

The Mansion is Haunted

Scam Artists Are Trying to Get You