According to the City of Miami Springs City Manager, William Alonso, a Miami-Dade County consultant is proposing expanding the TGK Jail Facility at the corner of NW 36th Street and NW 72nd Avenue.

The manager expressed concern over the matter in an email sent to us.  The City Manager has coordinated to have the Corrections Director provide a presentation on the project to the City of Miami Springs at the March 9th Council Meeting.

All concerned residents are urged to join the meeting on March 9th at 7pm at City Hall.

Here’s the communication from the City Manager:

“The city received information this past weekend of a proposed expansion by the County of the TGK facility. The project involves replacement of the stockades with a larger building or buildings. We reached out to the Corrections Director and they have agreed to attend our March 9 Council meeting to give a presentation on this project and a Q&A with Council. We urge residents to attend. In the meantime Mayor Deno, Mayor Bain and Miami Springs Council have reached out to their respective Commissioners and other elected officials in an effort to get more information on this and find ways to stop this from coming to fruition. This will have a huge impact to both Virginia Gardens and Miami Springs. It is our opinion that any expansion should be at the West Dade Corrections facility and not at TGK. We will provide more information as it becomes available.” – William Alonso

The City Manager then added the following in an updated communication:

“We received further information from the County on this issue:

2)      Any process will include public meetings and input of the community and elected officials, including our County Commissioners who have not weighed in as yet” – William Alonso

As you know, the City of Miami Springs is attempting to annex the area west of Miami Springs and east of the Palmetto Expressway from NW 36th Street to NW 74th Street.  The jail would be within the boundaries of the annexed area. 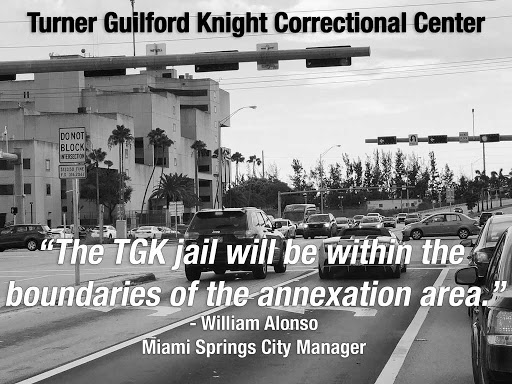 The Village of Virginia Gardens also posted the following to social media:

Mayor Deno IV received information this past weekend involving a consultant study done on behalf of MDC, regarding the expansion to the TGK Correctional facility grounds. This study included replacing the stockades with a larger building, housing a parking garage, mental health facility, and other holding areas. This potential expansion would have a tremendous effect on not only our Village, but Miami Springs, Medley, Doral, and all our committees as a whole. Both Mayor Deno, Mayor Bain and city officials have reached out to District Commissioners, Mr. Jose “Pepe” Diaz and Mrs. Rebeca Sosa, and other elected officials to strongly voice their concerns. The director of the Department of Corrections has agreed to attend and answer questions at the Miami Springs Council meeting on Monday, March, 9, 2020 and our VG council meeting on March 19, 2020 at 6:30pm. These meetings are open to the public. The information we have at this time is limited, but as we get more it will be made available. In the meantime, if our VG residents, property or business owners would like more information they can reach out to our District 12 Commissioner, Jose “Pepe” Diaz. Nothing is set in stone, Mayor Deno and the VG council will continue to work diligently to prevent this expansion, and to make sure any future proposals are done with not just transparency, but with consideration of the impacts to all of the surrounding areas. According to county officials, “Any process will include public meetings and input of the community and elected officials, including County Commissioners who have not weighed in as yet.”

Motorcycle vs SUV Accident at 36 Street and Curtiss Parkway (57...

Clear the Clutter for a Cause

40% of Police Calls Come from the Hotels