Overall, there were 46 reported criminal incidents during the month of May.  They included 4 residential burglaries, 2 sexual assault incidents, 3 strong armed robbery incidents, and one incident of assault with a deadly weapon.

There were 2 reported incidents of sexual assault in Miami Springs during the month of May.  The first incident occurred on May 4th in the 1100 block of South Royal Poinciana Boulevard where the Holiday Inn is located.  The second reported incident occurred on May 7th on the 200 block of Corydon Drive.  This second incident received a lot of local news coverage, but after further investigation, the City of Miami Springs Police Chief released a letter which stated:  “As of this date based on all of the evidence gathered by the Miami Dade Police Department’s Special Victims Unit and Crime Scene Investigations there is no evidence to support that any such assault took place.”

There were 4 incidents of auto theft during the month of May.  They occurred along NW 31st Street, East Drive, Curtiss Parkway, and Hunting Lodge Drive.

There were 11 incidents of theft during the month of May.  Four of the incidents were Burglary Curtilage cases, two cases were thefts of auto accessories, one incident of bicycle theft, and 3 cases classified as “theft other.”

There were 3 drug incidents in the Springs during the month of May.  Two cases were along NW 36th Street with the third case reported at the 500 block of DeSoto Drive. 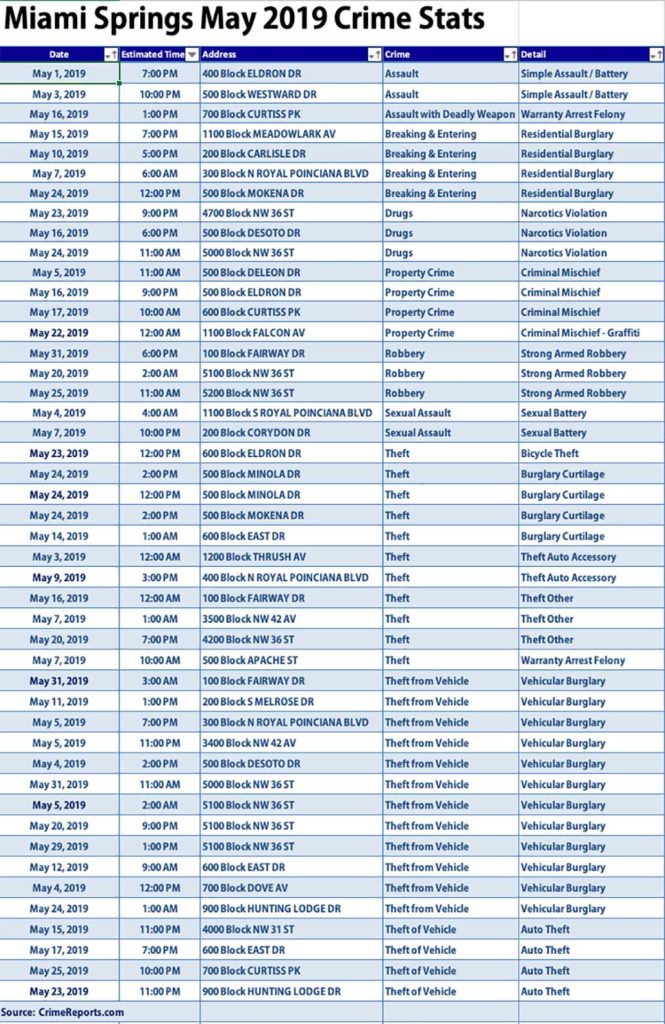 CDC Recommendation: Cancel All Events of 50 or More People

Springview Elementary Music Department is getting a New Look!