Cell phone video posted to social media on Wednesday showed two female students at Miami Springs Middle School in a full on fist fight.  Fortunately, a Miami Dade County Public Schools Resource Officer and an Assistant Principal were nearby and able to pull the pair apart.

The video was originally posted to Twitter by @Imdatboiii2 on Wednesday, September 15, 2021.  The post said: “Y’all stop playing with BIG K❗️❗️ let y’all females try me I don’t got a Hulk but I got a BIG K 🤞🏽💙 P.s that’s my little sister 😂😂💙” – We’re not entirely sure what that meant.  We couldn’t figure out if BIG K refers to one of the girls, or BIG K as defined by the Urban Dictionary (don’t look that up), or BIG K referring to something else entirely. 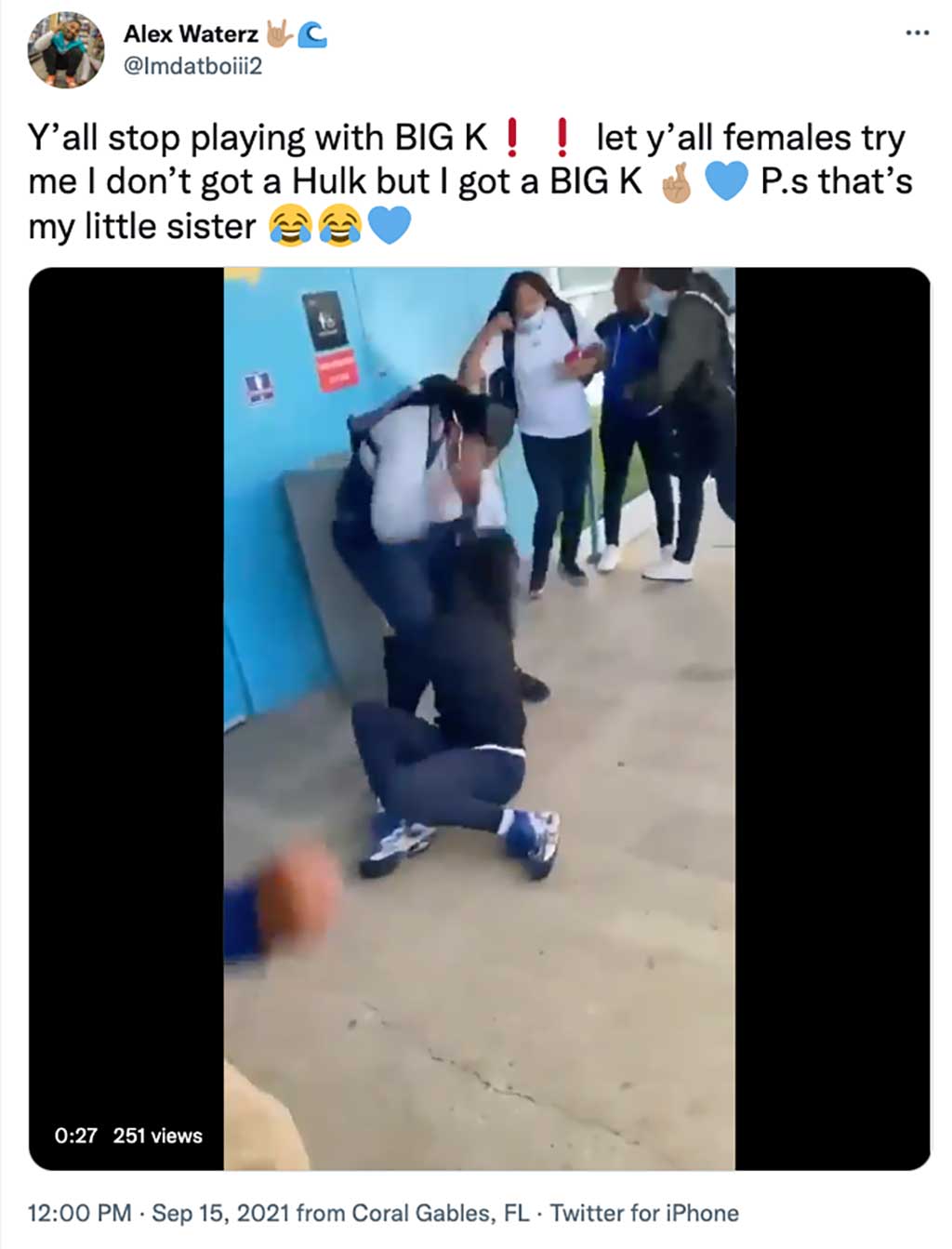 Y’all stop playing with BIG K❗️❗️ let y’all females try me I don’t got a Hulk but I got a BIG K 🤞🏽💙 P.s that’s my little sister 😂😂💙 pic.twitter.com/f4CRnudQWM

I know many will say, “There have always been fights at that Middle School.”  That’s correct. When I went to that school back in the ’80s there were many fights.  That’s not new.

However, as parents, we want our kids to go to schools that are safe and have the least number of fights.  No one wants to send their daughter to school to get into a fight.  Unfortunately, traditional public schools, like Miami Springs Middle School, have their hands tied when it comes to the enrollment of kids with behavioral issues.   Whereas Charter Schools have a zero tolerance policy towards fighting.  For the most part, if you get into a fight a Charter School, they kick you out.  That puts an unfair burden on schools like Miami Springs Middle School that can’t weed out kids with behavioral issues as easily as a Charter School can.

Again, we know it’s Middle School and kids will be kids, bla bla bla.  But ask yourself this.  Why are some of the charter schools seemingly free of this sort of behavior?  Same age groups.  Same hormones.  Could it be that a zero tolerance policy and the flexibility to remove students with behavioral problems has something to do with it?

We don’t have the answers to this, but as someone who has a love for Miami Springs Middle School, i wish they had the same flexibility as the Charter Schools do.

What are your thoughts?  Please share in the comments section or via social medai.