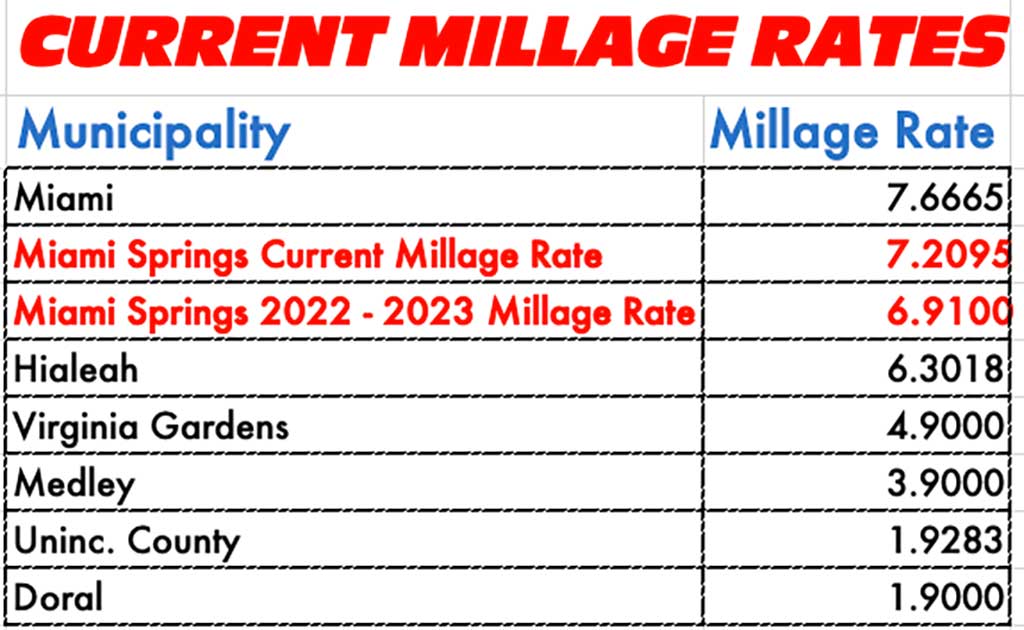 In a split 3 – 2 vote, the Miami Springs City Council voted in favor of lowering the Miami Springs Municipal Millage Rate (aka tax rate) from 7.2095 to 6.9100.  Back in July, the City Council had voted unanimously to lower the millage cap to 6.9900. That initial cap rate is not the final rate for the upcoming fiscal year, but it set a cap that the new rate could not go higher than 6.9900, but it could go lower.

Last night, 3 members of your Miami Springs city Council voted in favor of lower the taxes even further to the 6.9100 rate while 2 council members voted against it.  Here’s the final vote:

In case you’re wondering, Bob Best is term limited out and Victor Vazquez will have to resign in November as he had to resign his seat on Council in order to run for Miami-Dade County Commission.  However, Councilman Vazquez can choose to run for City Council again in April if he so chooses.

TAXES WILL STILL GO UP

Does the lower rate mean you’re going to pay less in taxes this year than last year?  Chances are you’ll still pay more.  While the rate may be lower, the valuation of Miami Springs homes have gone through the roof.  As a result, the value on which the millage rate is based has gone up.  So while the tax rate is lower, don’t expect to pay less in taxes this year versus last year. 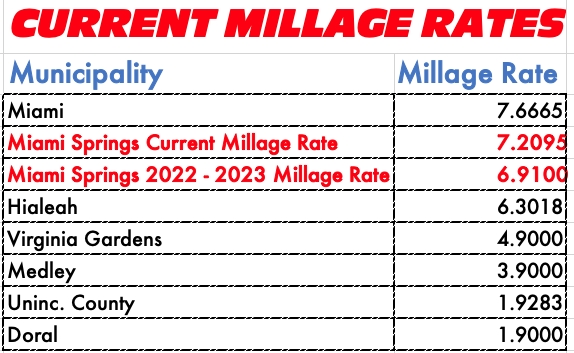 We applaud the efforts by this Council to have the fiscal discipline to lower the tax rates…Especially in such an inflationary time.  We want to specifically thank Jacky Bravo, Walter Fajet, and Mayor Mitchell for voting in favor of this lower millage rate.

Below is a chart of the Miami Springs Millage Rate throughout this century.  In the early 2000s the millage rate increased to over 8.0000.  Taxes then bottomed out at 6.1698 in 2009.  Then they slowly increased to 7.5000 in 2015.  It has since been going down slowly and next year will be back below the 7.0 mark at 6.91000.  The City of Miami Springs has also committed to lowering the millage rate if the annexation application is finally approved and the City successfully adds the significant tax base to the west of our city.

Not Completely Final Yet

The millage rate isn’t final until it’s passed again in a second reading at the next City Council Meeting.