Well, not too far from Miami Springs, there’s a little piece of aviation history residents can enjoy.  In just about a 30 minute drive down to the Miami Executive Airport (formerly known as Tamiami Airport), residents can enjoy the Wings Over Miami Museum.  Now, I’m going to set expectations.  It is not the Smithsonian Air and Space Museum in Washington.  It is not the Intrepid Museum in New York City.  However, it does have a super star attraction in the form of the Grumman F-14 Tomcat.  Yeah, we’re talking about the real star of the Top Gun Movie.

If you enjoy aviation and aviation history, this air superiority fighter is a must see.  The Tomcat at Wings over Miami is an F-14D model that was delivered to the Navy on August 22, 1991.  The plane served aboard the U.S. Aircraft Carrier USS Theodore Roosevelt.  This Aircraft arrived at Opa-Locka Airport on September 28, 2006 “where it was demilitarized.”  It was then taken apart and transported to the Wings Over Miami Museum at Tamiami Airport and re-assembled for civilian display.

Of course, the museum also has other planes and even a Russian Mig on premises.  But there’s no mistaking who the star is at this air museum in Miami.

While at the Museum, we found this cool collectible piece.  It’s a model of the 1929 Curtiss Robin Airplane by Ertl Collectibles. 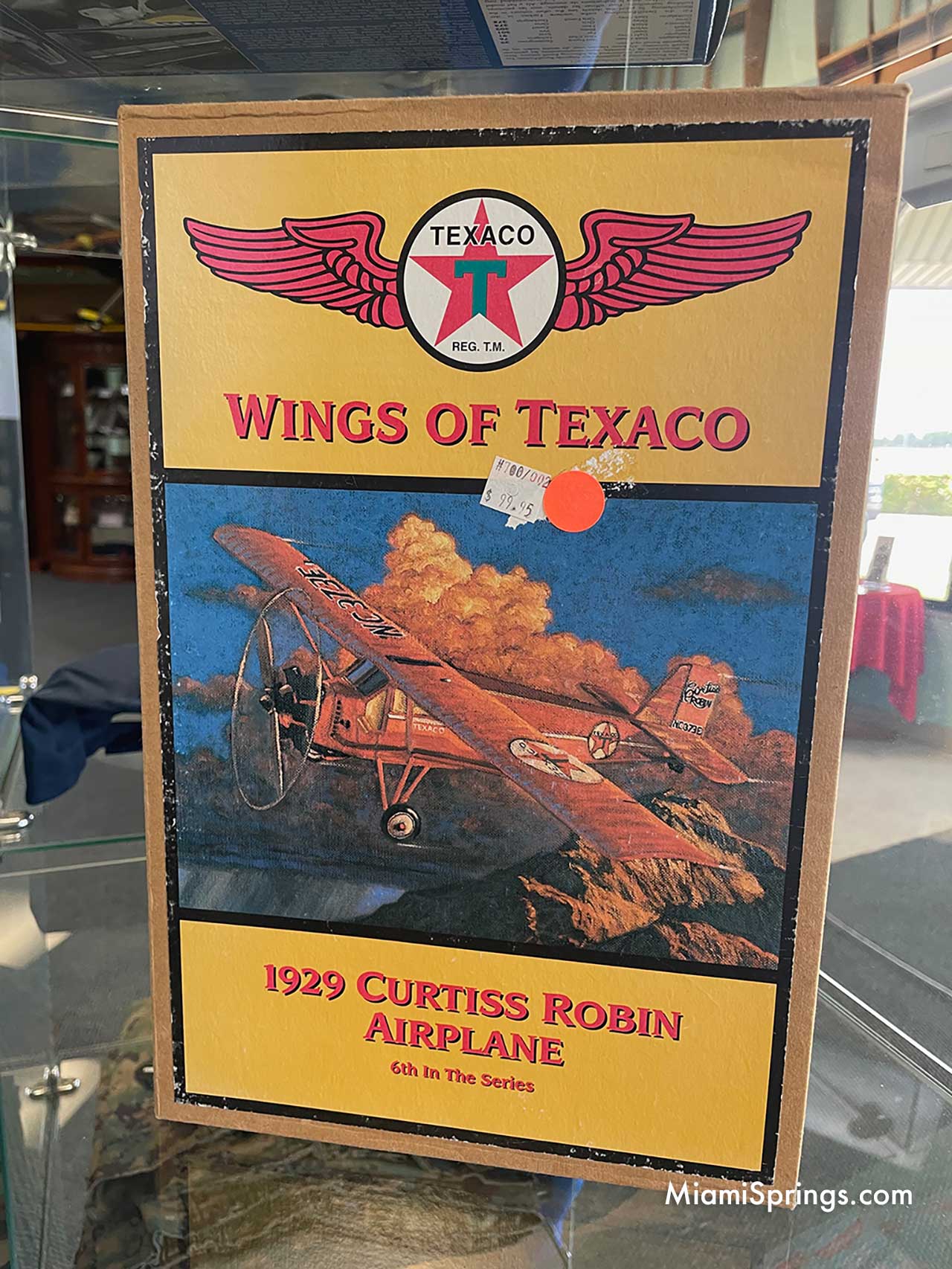 The back of the box is very interesting with a profile diagram and overhead diagram of the Curtiss Robin.  It even highlights the Aircraft Specifications: 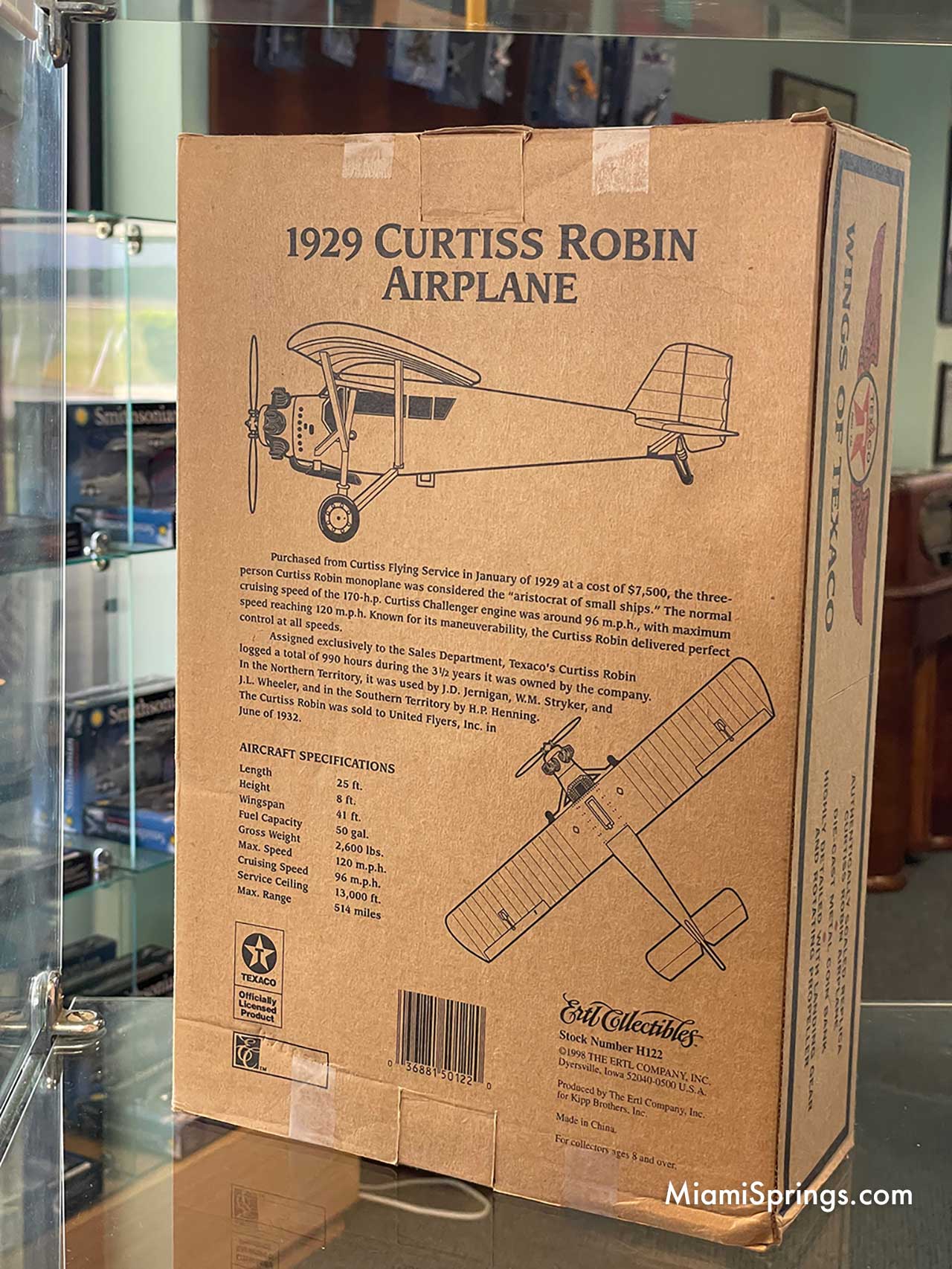 Just outside the museum, you’ll notice there’s a memorial featuring a restored replica of the Douglas A-26C Invader that was used during the Bay of Pigs assault activities by the exiled Brigade 2506 liberation forces. 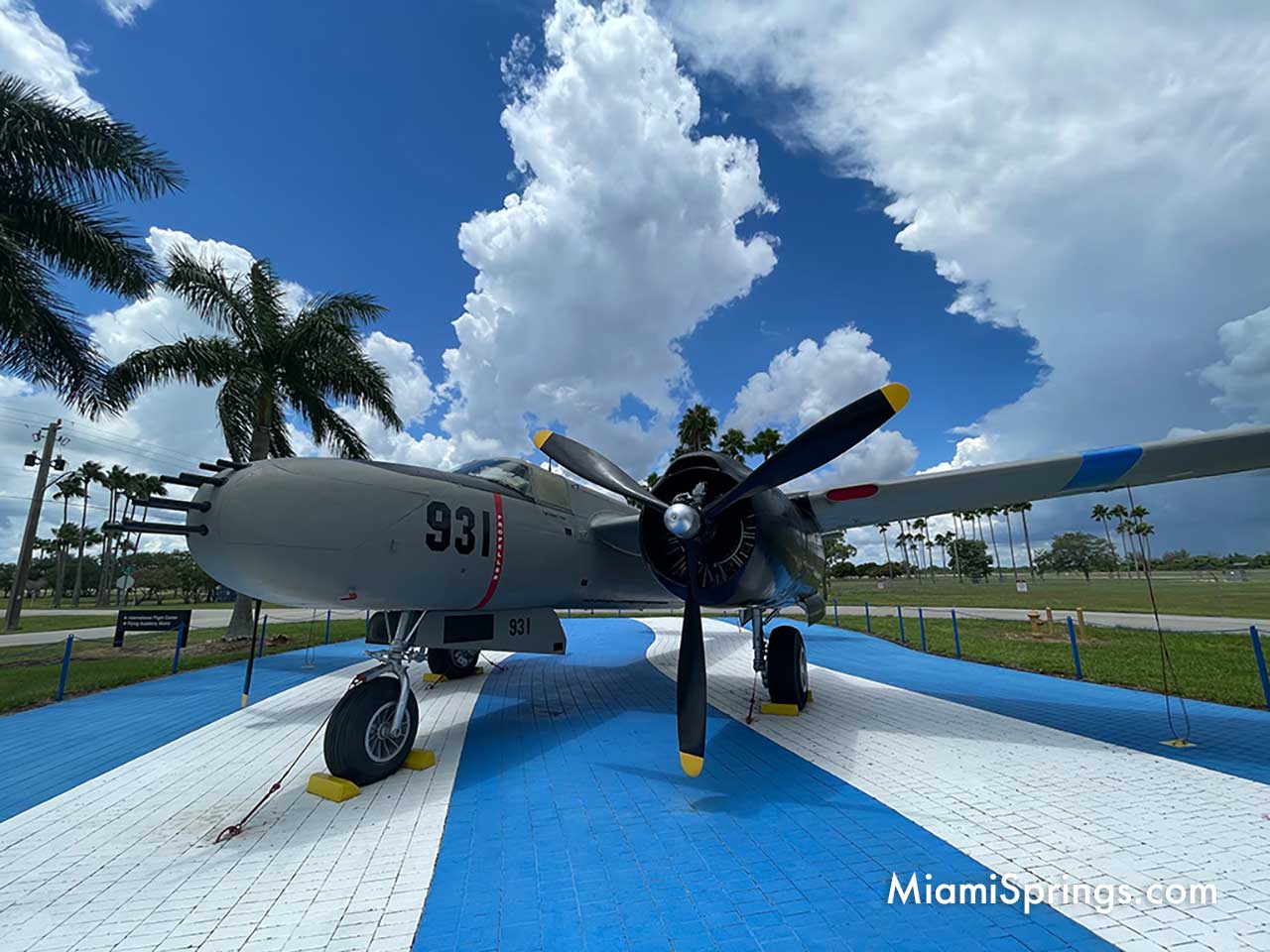 On the memorial there’s a plaque that reads:

This monument is dedicated to honor the ten Cuban pilots of the 2506 Brigade “Liberation Air Force” and four American Central Intelligence Agency volunteer pilots, members of the 2506 Brigade, who perished during the air strikes and landings of the ill-fated invation of the Bay of Pigs, Cuba, on April 17, 1961.

Flight operations for the attack were coordinated by the Central Intelligence Agency and the Alabama Air National Guard.  A total of seventeen B-26 fighter bombers were used in training and designated for the eventual implementation of the planned air strikes.  However, due to political considerations, last minute orders from the White House reduced flight operations to a minimal task force of eight, which compromised the operation and resulted in its failure.

The restored B-26 fighter-bomber displayed on this site is a replica of the aircraft used by the Liberation Air Force.

The Cuban Pilots Association joins the entire Cuban exile community in remembering those martyrs, who by falling in an honorable action, left a wake of glory under the Cuban sky.

Their memory will help ensure that the exiled Cuban community, as well as its American allies, achieves and preserves the freedom for Cuba that they sought through the sacrifice of their lives.

Have my clothes gotten smaller?

City Votes No on More Murals