We have watched a huuuge amount of TV this past year. I, for one, have witnessed more people getting vaccinations than the somewhat limitless side effects noted at the bottom of the screen in drug commercials.

As a result, we have all seen thousands of commercials for nostrums which treat every imaginable ailment. Suddenly, a breath of fresh air wafted from the morass of big pharma commercials when we saw one for a cookie. This was not an ordinary cookie; it was made of Metamucil 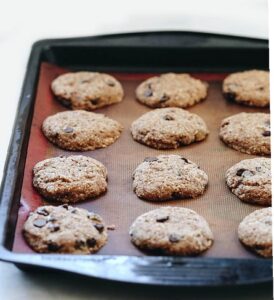 ®. Chocolate, cinnamon and apple crisp were among the flavors. They’re called ‘thins’ so don’t worry about up ending your diet unless you wish to spend a large portion of your day in the can.

Were consumers tired of mixing the Metamucil powder into some liquid? That was as much exercise as some of us get. Were their gummies not doing the job? Piggy backing off the venerated Flintstones Vitamins® was a good marketing tool.

They told us we need about 7 grams of soluble fiber per day from psyllium husk to make it right. I remember some psyllium husk being passed around among the older ‘rockers’ during classic rock concerts. Some of the performers looked like they could utilize the fiber too. A Metamucil cookie is so close to dessert that you’ll want to up your fiber anytime.

From the original powder mix, they had developed a smooth texture because the original was perceived as too grainy or sandy. Flash back to when you dropped a peanut butter sandwich in the sand and had to brush it off. Did you taste some sandy stuff? That’s why they did the smooth texture thing.

The first incarnation of the product was as mortar for brick layers. I guess the taste really wasn’t that good when mixed with plain water but mixed with flour and whatever else you add into the batter it was good enough to craft a cookie. We should have realized the upheaval in the market when Antacids added flavor. What happened to good old Plop Plop Fizz Fizz?

In what goes around comes around in the world of food marketing, remember when yogurt was the answer to a dieter’s dream? In a quest to out-market the next guy, some brands advertised light yogurt, which means they took away what little fat they had. They had already taken 99% of the fat away, and to me that means they took away 99% of the taste. What did they get? They got a tasteless cup of a bland concoction that was supposed to be good for you.

Out came lighter yogurt. What could be lighter than light yogurt? Not even a spoonful of angel’s breath! Now you could lose weight just by the physical act of moving the spoon to your mouth. This was the dieter’s dream. You were eating less than nothing and you were losing weight too! I want to get on that band wagon. I’m going to develop a pill that doesn’t do anything. I’ll advertise that it ‘Lets you lose weight while you sleep’. If the person tosses a lot in their sleep, I’m sure it will burn a couple of calories, so technically we’re on the right side of the law. 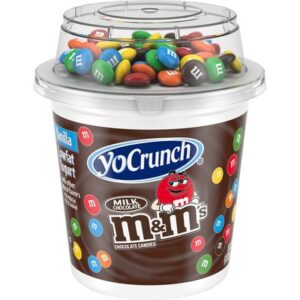 It’ll work even better for those with restless leg syndrome. We’ll call it ‘Sleep-it-off’. With a name like that, imbibers will fill a whole new market niche.

When the marketing dept. realized they couldn’t take anything else away from yogurt they started adding ingredients because there were those who demanded more. Consumers wanted something with their nothing. They added fruit. Fruit on the bottom, fruit on the top, fruit already mixed-in so you didn’t have to bother turning the little spoon 2 or 3 times. And they saw this was good.

Time to take a breath. The yogurt market had reached a plateau. When everyone had fruit, fruit became passé. Now what to do? It was discovered that there was a market niche for people who wanted their yogurt with an extra zing. Something that was undreamed of in the early days of yogurt. Candy! Yes! That’s when we realized it had come full circle. There in the pop-up lid of the yogurt that had slimmed America, or thought it did, was a portion of chocolate. I was astounded! Right next to it was yogurt with a helping of Oreo Cookie Crunch® and other candy bar add-ons. These were not mixed in for a reason. They wanted you to see the prize, to reward you for eating yogurt!

It had become light and fit yet decadent and fattening. What a combination!

Your body didn’t know whether to lose or gain, come or go and isn’t that a most apt metaphor for the year we just left?