We get bored easily and with so much electronic wizardry constantly occupying our time, we sometimes look to other forms of entertainment. Let’s go to an amusement park and be amused. Some of the amusement can come in the form of a thrill ride and I’m not talking about the It’s a Small World type. There are other ways to lose your lunch. Let’s take the way-back machine, a fictional machine from the cartoon segment “Peabody’s Improbable History”, a recurring feature of the 1960s cartoon series The Rocky and Bullwinkle Show, to Palisade’s Park in New Jersey.  It was a magical place for kids. You could roam amongst the rides and games and swim the pool and dance to the bands. Then there was the big scary wooden roller coaster. It took years for me to get up the nerve to ride the Cyclone, but when I sucked it up and strapped in, it was a thrill. In the 1960’s it was the leading edge of thrill rides and about to be copied and improved upon all over the country. 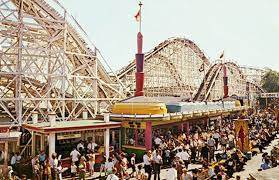 Amusement Park thrill rides are normally shut down because of safety concerns but not the Gold-Striker roller coaster at Great America Park in Santa Clara CA. It had to be taken offline because the riders were having too much fun. Was there an accident? No! The riders were screaming too loudly and disturbing the neighbors. Thrill seekers start screaming from a height of 108 feet on the ride as it drops 103 feet at 54 MPH which is equal to the sound Congresspersons make when a lobbyist is tossed off the roof of the Capitol building. They’re not shutting down Congress because of the screams.

As Congresspersons see their pay-day vanish into the pavement the decibel level can rise to that of the Real Housewives of New Jersey star Teresa Giudice when she broke a nail trying to slam the door on Federal agents at her home. Back in California, the San Jose Mercury News reported that the shrieks were exceeding the decibel limit agreed upon in a settlement with Prudential Real Estate, which owns adjacent properties.

The amusement park lawyers advised they have a good case because buyers screamed quite as loudly when told the price of California real estate and it disturbed the thrill seekers. “Nothing brings you down to earth like a bunch of screaming middle-agers. It sounded like their parents” said Jack Klinghoffer, park attorney. Originally, people in nearby buildings thought the screams were coming from a first-floor bank’s depositors when told the yield of their savings accounts.

Great America had to cover a portion of the track in a sound-dampening tunnel, but would it have been less expensive just to gag the riders? “They could have tied them, blindfolded them and changed the name of the ride to A Rolling Hostage Adventure said Klinghoffer. The park could have produced world class screams by simply forcing those teens to watch repeated episodes of ‘The Real Housewives of Orange County or simply recorded their response when told how much it cost them to ride.

Kingda Ka, a Six Flags Great Adventure in New Jersey could just be considered the scariest roller coaster in the world. The track’s height of 456 feet is over 45 stories and sends riders hurtling on the downside, at 128 miles per hour, which is a speed reached in just 3.5 seconds and equaling that of any motorcycle taking off from East Drive to LeJeune on Okeechobee Blvd. It does not, however, equal the sound or the screams.