Airlines have pinched us from the palette to the posterior and we paid for the privilege. Flying to a vacation destination is like eating the skin of a banana to get to the banana. It bites the palate before pleasing it. We all know the pitfalls of air travel. Fast as it is, over time it has degenerated to a level of comfort right below riding a bike with flat tires over a rocky road. Service generally has taken a nose-dive too. I’ve seen cattle drives with better amenities.

And it’s not pretty! We have reached critical mass or is it critical (m)ass? 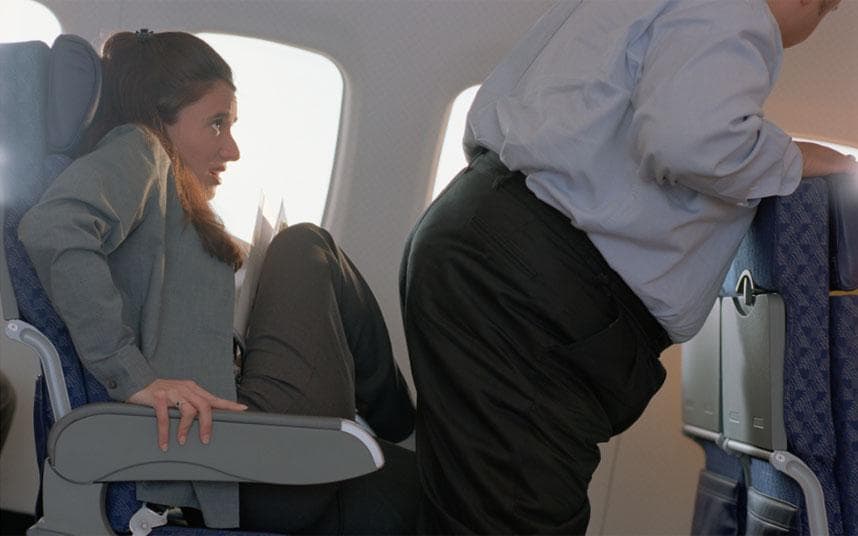 When we flew in the last century there was 35 inches of space between a point on your seat (seat pitch) and the one in front of you. That has dropped to almost 31 inches and seat width has shortened from18.5 inches to16.5. At the same time, America’s obesity rate has doubled. Didn’t the airlines know we were growing? We’re bigger and getting larger and the seats are small and getting smaller. Sorry America but don’t complain when you can’t be comfortable in your seat. Your consumables have surpassed your comfort capacity.

There are no federal regulations for the amount of space we need in which to feel comfortable when we fly, so the airlines have stepped into whatever space is left with the invention of a ‘shoe-horn’ for your butt, or a ‘butt-horn’. Flight attendants must complete an 8-hour course over two days to be qualified to utilize this amazing device.

As you enter the aircraft, a laser scan will identify those needing ‘extra help’. Without letting other passengers know, it will automatically tag the offending butt with a readable code which only a qualified flight attendant knows. The flight attendant will then follow the big person to their seat, take the foldable device from their back pocket and surreptitiously ease the passenger in. A well-trained flight attendant can do this with one hand and with the other on the person’s shoulder while asking “if there’s anything I can do for you” or “are you allergic to peanuts?” without arousing suspicion.

But that’s not all! The friendly skies may have turned unfriendly! Pay as you go is turning into pay if you need to go. An Irish airline known for making their passengers pay for every little perk on its flights has decided to charge them to use the toilet. This particular airline operates in areas that use both the Euro and the Pound but not credit cards. I see a problem here. If you don’t have the cash, you’ll be joining the Olympic leg crossing team. It was bad enough that this airline charges for tap water, they now want you to pay coming and going! I have a feeling they’re cutting back on the oxygen too. They may want our brains oxygen deprived so we can’t get it together to speak up. Can you imagine if they charged for oxygen too? If you were a heavy breather, you’d have to take out a second mortgage.

So now we pay for potty privileges on some flights. They say it would eliminate all those unnecessary trips by passengers who probably want a little time away from the crowd in a tiny room. Solitary confinement would almost be better than arguing about bathroom privileges with a flight attendant who has the power to land the plane and make you get off. Or they might knock on the door if they feel you’ve been in there just a little too long. Hey 34 C did you fall in? Talk about embarrassment. I could hear the air traffic communications now…..”You say you want to land at the nearest airport? Is there some trouble up there? Yeah, 3 passengers maxed out their credit cards and the flight attendant didn’t have change for a twenty.” The airline which obviously learned finance 101 from Scrooge McDuck, is sending us a signal. What’s next, tipping the pilot? I hope this doesn’t spread to other sectors of the economy. I wouldn’t want to rent a grocery cart if I’ve got to buy more than 10 items.