Holy Week is the final week of lent.  It begins with Palm Sunday where Christians commemorate the triumphant return of Jesus to Jerusalem just days before his crucifixion.  He was greeted like a rockstar, but instead of a red carpet, the faithful laid down palm branches in his path.  And unlike a general returning on a galloping horse, Jesus arrived on a donkey symbolizing peace and humility.

Blessed Trinity is hosting Lenten Penance Service on Monday, April 11th at 7pm.  The act of confession is important because it allows the faithful to put things right with God and to know that they have been forgiven. The Catholic Church believes that only God can forgive sin. God sees that you’ve taken the extra effort not just to pray privately for forgiveness, but to ask for forgiveness in front of one of his representatives.  For the faithful, the penance service provides an incredible relief lifting a huge weight and burden off your shoulders.  In modern days, we might also call this a free mental health service unburdening yourself from past sins.

Holy Thursday commemorates the Last Supper of Jesus Christ with his 12 disciples.  This is where Jesus establishes the sacrament of Holy Communion.  Jesus breaks the bread and says, “Take this, all of you, and eat of it, for this is my body, which will be given up for you.”  In a similar way, when was supper was ended, he took the chalice and said, “Take this, all of you, and drink from it.  For this is the chalice of my blood, the blood of the new and eternal covenant, which will be poured out for you and for many for the forgiveness of sins.  Do this in memory of me.”

Prior to the supper, Jesus humbly washed the feet of his 12 disciples.  Surely a grimy task as everyone wore sandals.  To put it into Miami terms, here are a bunch of guys with “Pata Sucias” and Jesus is on the floor scrubbing their feet clean.  One of the disciples, Peter, objected.  (How am I going to let the son of God wash my feet?)  But Jesus says to him, “Unless I wash you, you have no part with me,” after which Peter agreed.

Mass of the Lord’s Supper

After the last supper, we know that Jesus went to the Mount of Olives to pray. That is where Jesus was famously betrayed with a kiss.  The kiss from Judas was to identify Jesus to the roman guard that came to arrest Jesus.  Jesus is then led to a Jewish cleric who condemns Jesus for blasphemy.  Jesus was then sent to the local governor, Pontius Pilate to be crucified.  Pontius Pilate initially refuses the request, but the crowd would not back down.  In order to satisfy the crowd, Pontius Pilate offered what he thought might be a trick.  Pilate offered to free a notorious prisoner, Barabbas or Jesus. Pilate had assumed the crowd would prefer to leave Barabbas imprisoned, but we know the crowd cheered to crucify Jesus and let Barabbas go free.  In many ways, this represents Jesus dying on the cross for our sins.

After Barabbas was set free, Pilate ordered the crucifixion of Jesus.  We know Jesus was then brutally tortured and adorned with a crown of thorns for the King of Jews before being nailed on the cross and crucified.

According to the Gospels of Mark, Matthew, and Luke, a great darkness struck the land from noon until three and the earth quaked splitting rock in twain when Christ was Crucified.

“From noon onward, darkness came over the whole land until three in the afternoon. And behold, the veil of the sanctuary was torn in two from top to bottom. The earth quaked, rocks were split” – Matthew 27:45,51

The scene of darkness during the crucifixion is captured in the mural at St. John the Apostle Catholic Church on East 4th Avenue in Hialeah, near Babcock Park.

After Jesus died on the cross, his body was covered in a shroud and placed in a tomb carved into a rock. 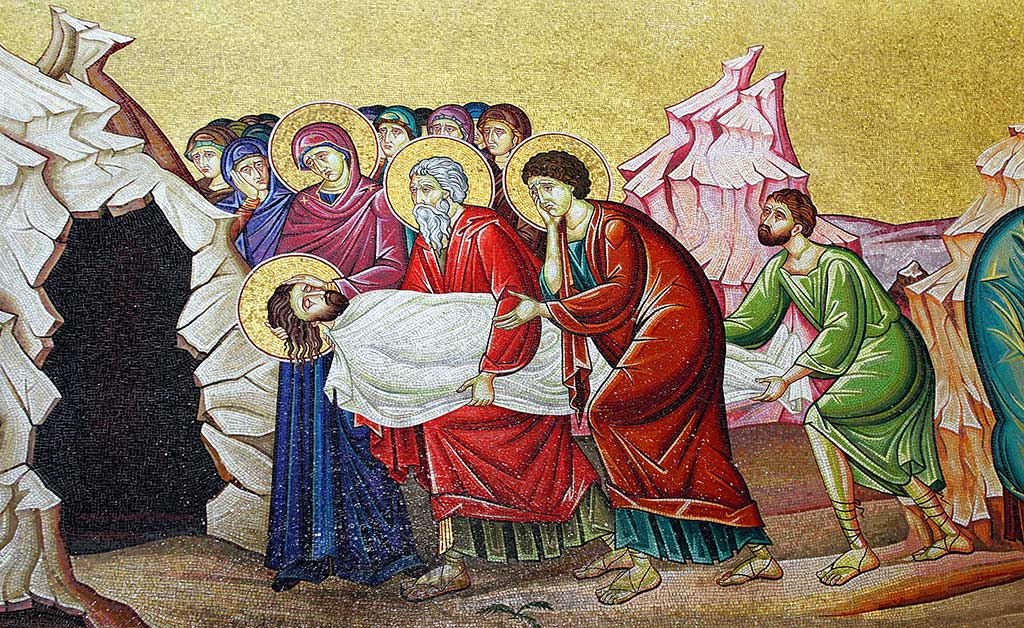 And on the third day, he rose again in fulfillment of the scriptures.  On Easter Sunday, we commemorate the resurrection of the Lord Jesus Christ.

On the first day of the week, Mary of Magdala came to the tomb early in the morning, while it was still dark, and saw the stone removed from the tomb. So she ran and went to Simon Peter and to the other disciple whom Jesus loved, and told them, “They have taken the Lord from the tomb, and we don’t know where they put him.” So Peter and the other disciple went out and came to the tomb. They both ran, but the other disciple ran faster than Peter and arrived at the tomb first; he bent down and saw the burial cloths there, but did not go in. When Simon Peter arrived after him, he went into the tomb and saw the burial cloths there, and the cloth that had covered his head, not with the burial cloths but rolled up in a separate place. Then the other disciple also went in, the one who had arrived at the tomb first, and he saw and believed. For they did not yet understand the scripture that he had to rise from the dead. Then the disciples returned home. The Appearance to Mary of Magdala. But Mary stayed outside the tomb weeping. And as she wept, she bent over into the tomb and saw two angels in white sitting there, one at the head and one at the feet where the body of Jesus had been. And they said to her, “Woman, why are you weeping?” She said to them, “They have taken my Lord, and I don’t know where they laid him.” When she had said this, she turned around and saw Jesus there, but did not know it was Jesus. Jesus said to her, “Woman, why are you weeping? Whom are you looking for?” She thought it was the gardener and said to him, “Sir, if you carried him away, tell me where you laid him, and I will take him.” Jesus said to her, “Mary!” She turned and said to him in Hebrew, “Rabbouni,” which means Teacher. Jesus said to her, “Stop holding on to me, for I have not yet ascended to the Father. But go to my brothers and tell them, ‘I am going to my Father and your Father, to my God and your God.’” Mary of Magdala went and announced to the disciples, “I have seen the Lord,” and what he told her. Appearance to the Disciples.