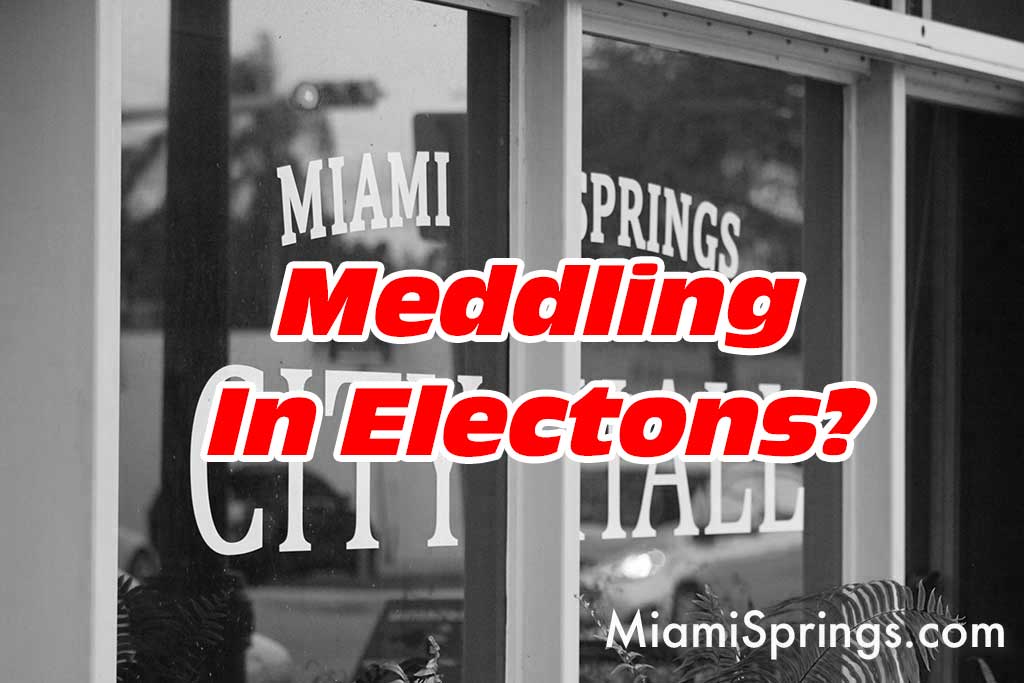 Bryan Avila has come through for the City of Miami Springs with capital funding from the State of Florida for local projects.  For the record, we very much like Bryan Avila and think he’ll be a great State Senator.

However, the City of Miami Springs should not be using tax payer dollars to build a social media profile with thousands of followers and pay a full time employee to manage the social posts to then use that investment in what is the equivalent of a candidate endorsement without saying as much.

It goes well beyond just a news announcement when the City is thanking the candidate “for all you have done for our city and will continue to do in the future.”  If that isn’t a candidate endorsement with the weight of the City behind it, I don’t know what is.

This City needs to refrain from meddling in elections.  That is not its role and the tax payer dollars, personnel, and resources should not be used to get involved in a local, State, or Federal election.

As such, I have asked the Ethics Commission to review the case and formally request that the City of Miami Springs refrain from these types of candidate endorsements and to remove the prior social media posts.

Municipalities should not be using resources to endorse, support, or otherwise assist a candidate during an election.

In fact, I wonder if the City of Miami Springs may have to report that endorsement as an in-kind donation in the form of social media advertising?

Bottom line, if the City of Miami Springs wants to ensure public trust, it should stay miles away from praising a candidate once they’ve declared their candidacy.

NOT THE FIRST TIME

Furthermore, this is not the first time the City of Miami Springs Administration has used City resources to interject itself into an election.  Back in 2015, in the middle of a mayoral campaign between Fred Suco and then Mayor, Zavier Garcia, the City of Miami Springs administration paid nearly $3,000 to print 10,000 copies of a flyer to contradict a political flyer that was created by the Suco campaign.  In other words, the City Administration used tax payer dollars and staff time and resources to counter a political campaign message.

After an exhaustive review by the Miami-Dade Ethics Commission, the COE Executive Director of the Miami-Dade Ethics Commission sent the City of Miami Springs “City Manager and his assistant (now the current City Manager, William Alonso) a strongly worded “recommendation” advising that they should avoid participating in this type of ad campaign during future campaign seasons.  Even if their motives were well-intended, it raises legitimate public-perception questions about their impartiality and the use of public funds to further an election.”

Click hear to view the full Miami-Dade Commission on Ethics & Public Trust Investigative Report (Case: K15-029) from 7 years ago. And yes, I was the complainant of that case at the time.  In the last 7 years, the City has avoided this sort of thing, but it looks like they want to get back to meddling in elections again.

Again, I like Bryan Avila and support his candidacy, but I’m a private individual and I’m not using your tax dollars.  The point is, the City of Miami Springs administration should not be using tax dollars, staff, and City resources to promote or support a candidate.  The City of Miami Springs should be impartial and apolitical when it comes to elections no matter how popular or how much money that candidate may have provided to the City in the past.

In a world where there are concerns of foreign powers using social media to influence elections, we shouldn’t have our own municipality using resources to tip the scales.

What do you think?  Should the City of Miami Springs use its resources to support and/or endorse candidates running for office?  Or should they be impartial and not get involved in supporting candidates?

Let us know what you think in the comments or via social media.